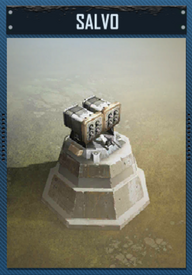 The Salvo is the successor of the Howitzer, boasting a higher range, DPS, splash radius and can target all air units.

However, it has the same weaknesses of its predecessor, namely the blind spot and the burst delay. The missiles also cannot chase faster-flying air aerial foes such as Reapers in some occasions. The Flak Gun serves better instead.

Retrieved from "https://war-commander-rogue-assault.fandom.com/wiki/Salvo?oldid=3426"
Community content is available under CC-BY-SA unless otherwise noted.