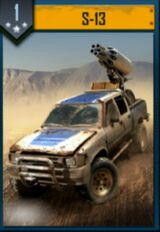 With it's rockets and all the carnage, the S-13 compensates it's low health with it's great support abilities, especially against infantry. It also doubles as a high-DPS unit against defense structures, as long as Tanks take the heat for it. Sometimes the S-13 can even be used in large swarms to overwhelm enemies with their swiftness, though it's quite vulnerable to splash damage.

However, it's capabilities are inferior to most other light vehicles. For 75 capacity it does not offer a lot and even the PK, which takes up a third of the space, trades DPS for the ability to target aerial units while having similar HP levels. A single M1A1 Abrams will do much more than 2 S-13s. It's only good as a starter unit, but no more.