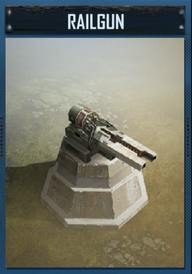 The Railgun can be very deadly against a group of ground units as it does penetrative damage which can hit multiple units in a line that exceeds its firing range. It should be noted, outside of its range, damage drops off very quickly, and it's attacks have long delays when not buffed by transformers.

Its main weakness is that it cannot target Air, and Light Vehicles can easily get out of its range before firing, just as long as it is not buffed by a Transformer and the mentioned units are moving at sufficient velocity, or have sufficient DPS to overwhelm the platform it is holding. Additionally, being the standard turret with the least range (on par with the Heavy Cannon), certain units can fire at it without retaliation as they outrange it.

Although not mentioned, Railguns provide a health boost to the platform that holds it, which scales with the railgun's own level.