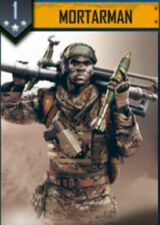 Mortarmen are support units. Being ground infantry, they are quite weak and vulnerable to many weapons and turrets, as well as Splash damage and aerial vehicles. The mortar deal great damage to buildings, enemy infantry, and light vehicles alike as well as being able to chip down heavy vehicles if other units are taking the heat for them. They are quite cheap to build compared to other avaliable units, so it should not be hard to amass an army of them.

An advantage they (as well as some other units like the M270 Launcher) have is the ability to launch their attacks over obstacles, whereas some defenses cannot retaliate (For example, a Machine gun may attempt to aim at enemies behind a natural structure, but will not fire since it's obstructed). This can be used to take out dangerous defenses such as Railguns.

It's best to destroy Splash damage defenses and enemy units quickly, as mortar men are glass cannons, and therefore, even a single shot from a Howitzer/Salvo can easily ruin your attack. Keep an eye for blind spots and make sure the guns are all fixated on the heavier vehicles. In the meantime, watch out for minefields with anti-infantry munitions.