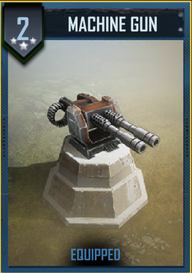 The Machine Gun can be a very good starting defense as it deals a reliable DPS to both air and ground units, especially when grouped with other MG turrets and buffed by a Transformer. It is the most commonly used turret for players of any level.

Tank-role units are highly effective in absorbing their DPS. Heavy Vehicles that are specified as such are the best at this job.

Is A Hard Counter To Light vehicles, Infantry

The Salvo and MG to deal sustained damage to armor while using the MG to cover the blind spot. Pairing i with a Railgun or a Flak Cannon are also good choices, as it can target both air and ground.