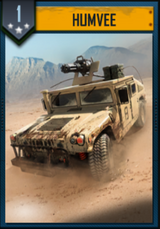 The Humvee is offered as a replacement to the PK. Taking twice the space and losing the ability to target fixed-wing aircraft (without the FIM-43 Redeye missile), it's significantly faster. It will still take time to accelerate to full speed but once it is at that, it will be able to easily lead enemy units in circles. It also retains the ability to attack while on the move, which further compliments it's role as both a support unit and as a kiting unit. It additionally features a wide array of equipment to enhance it's abilities.

Like all light vehicles, it has little armor and will be easily destroyed by mine fields as well as just anything that does damage. A well-known strategy is with an entire platoon of humvees (the squad count allows up to 25 humvees in a platoon which is 1250 space occupied). The combined might of these vehicles can dish out insane amounts of damage within seconds, often destroying railguns before they can fire (unless buffed by a transformer) and outrunning mortar shells, as well as shredding helicopters, while minimizing a lot of damage taken. The only weakness to this would be anti-vehicle minefields, but that's just about it for every ground unit.