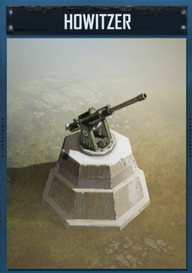 The Howitzer turret can be decent on defense. It may not be accurate, but the right targets will suffer the most. Most notably, light vehicles and infantry are the easiest targets.

It has a blind spot where it cannot fire upon. It also strictly targets ground foes, limiting their effectiveness on a defense unless aided by other turrets. This alone makes it a poor pick as even the Railgun, another ground-only turret, does better against all grounded units at the cost of a shorter range.

Tank-role units such as the Rhino can mostly ignore this turret as the Howitzer deals very little damage to them. However, they tend to enter it's blind spot when attacking it directly, so they must be manually directed to draw away it's fire.