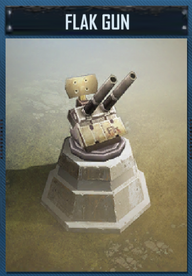 The Flak Gun is very deadly to all air units due to it's great range and generally high DPS.

They pose a great threat to air-based armies, only second to the Heavy Flak. It can be used to easily counter drone swarms and Fixed-Wing Aircraft, such as Reapers and Thunderbolts, as well as helicopter attack squads. Usually 1-2 Flak Guns along with a few more machine guns can effectively prevent enemies from utilizing air support or deter aerial platoons. However, as it does not target ground units, the player must ensure sufficient firepower on the ground, or equip turrets able to target all of them. (For example, a base with Railguns and Flak Guns will be extremely vulnerable to either an aerial or grounded army if the turrets are properly countered)