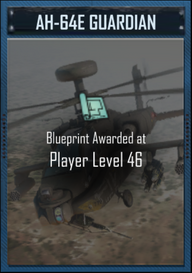 The AH-64E is the next replacement for Cobra. It's main advantage is it's increased DPS and efficiency against heavily armored vehicles, as well as it's splash damage capabilities, allowing light vehicles and infantry squads to be easily taken down. It's also quite strong against enemy structures as it can simultaneously damage barriers and buildings. However, it loses the ability to target fixed-wing aircraft in exchange and this can be rather dangerous unless the player has the Gatling Cannon secondary.

Retrieved from "https://war-commander-rogue-assault.fandom.com/wiki/AH-64E_Guardian?oldid=3457"
Community content is available under CC-BY-SA unless otherwise noted.